There are so many takeaways from the national and state elections held earlier this month, but one in particular strikes the strongest cord for me. In this time of increasing partisanship and rising divisiveness, there is no greater need than now for nonpartisan voices to emerge that seek to bring people together. While that is a worthy and necessary goal, it is a difficult one to achieve, especially when folks on either side of the political divide want to win simply by beating the other side politically, regardless of the worthiness of the issue or the need to advance the public interest. Citizens Union exists to provide a nonpartisan perspective in the hope of finding the common ground necessary to advance the public interest. Problems may be addressed by one side winning out over the other, but I am not convinced that our problems will truly be solved unless there is buy in from stakeholders other than those from the winning side. How we get there is a question worth pondering. While we do, please read on about the recent work of Citizens Union. And best wishes for an enjoyable and relaxing Thanksgiving celebration.

Following the General Election earlier this month, Citizens Union is gearing up for the 2011 legislative session and plans to hold legislators accountable to their stated positions in our 2010 candidate questionnaires on issues such as independent redistricting, campaign finance reform, and ethics reform. With control of the State Senate hanging in the balance, we, like many across the state, are awaiting the completion of ballot counts in three Senate races: Craig Johnson/Jack Martins in Long Island, Antoine Thompson/Mark Grisanti in Buffalo, and Suzi Oppenheimer/Bob Cohen in Westchester. If the Democrats lose one of these seats, the Senate will be tied 31-31 and a power-sharing agreement will need to be developed. Governor-elect Andrew Cuomo has asked the Chief Judge of the Court of Appeals, Jonathan Lippman, to ensure that these races are decided quickly, before the beginning of the legislative session in 2011 to ensure that important issues can be addressed, such as the state budget and other items in Cuomo’s agenda. Lippman has in response established an expedited calendar culminating with the Court of Appeals hearing any final matters on December 20, 2010.

As part of our ReShape New York campaign to end partisan gerrymandering – CU’s central goal in 2011 – CU is reaching out to potential partners to create a coalition of diverse stakeholders, including citizen groups, business leaders and advocacy organizations, who will engage, educate and mobilize the public to demand change in the redistricting process. New York will receive U.S. Census data in April 2011 which will begin the process of redistricting, and must pass legislation creating district lines by the end of the legislative session in 2012. Governor-elect Andrew Cuomo has promised that he will veto any lines not drawn by an independent commission. NY Uprising, the group formed by former Mayor Ed Koch (with which Citizens Union has worked), has secured pledges from majorities in both houses of the legislature to support the creation of an independent redistricting commission. Through Citizens Union’s candidate evaluation process, we have a number of legislators on the record for creation of an independent commission while also crucially opposing an alternative proposal that does not provided needed independence. 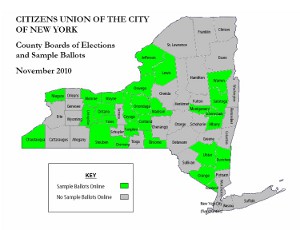 Following the troubled debut of the new voting machines and process on Primary Day, one of Citizens Union’s longstanding proposals for improving elections gained new traction. Earlier this month CU  released  its  analysis of county boards of elections  in New York State which found that 27 counties posted ballots online before Election Day. CU again called upon the City Board to post sample ballots online to help prepare voters for going to the polls, given complaints by voters about the confusing format, lack of familiarity, and small font size of the ballot. The survey also looked at best practices and noted that 8 county boards demonstrated exceptional practices by linking the sample ballot to the poll site locator, putting at voters’ fingertips the exact ballot that they will see on Election Day. We are currently exploring ways to require the City Board to post ballots online, such as the City Council using its authority over the City Board’s budget, if not its legislative authority, and possible state legislation

Citizens Union’s role as a resource for the 2010 City Charter Revision Commission came to a close with the approval of two questions on the ballot on Election Day. The first question reducing the term limits for City elected officials from three four-year terms to two four-year terms was approved by voters 74-26 percent. Citizens Union had recommended a “No” vote on question 1, believing that reducing the limit on terms from three to two will harm city governance by limiting the power of the City Council. Citizens Union had recommended to the Commission a limit of three consecutive four-year terms for council members and two consecutive four-year terms for citywide electeds and borough presidents. The second question approved by voters 83-17 percent was a hodgepodge of issues related to election reform and government administration. Citizens Union recommended a “Yes” vote on question 2, as we had supported four of the seven proposals in our report to the commission,  Increasing Avenues for Participation in Governing and Elections in New York City , including disclosure of independent expenditures and the reduction of petition signatures needed to get on the ballot, among other items.  Read Citizens Union’s reasoning behind the positions we took on these ballot questions.

Citizens Union has been working with the City Council to improve their website and saw one of our earliest proposals from that process come to fruition with the first-ever webcasting of a Council stated meeting on November 17th. We recommended this reform in our 2006 report,  Principles of Council Reform . Go to http://www.council.nyc.gov/live to watch the live video broadcast when the City Council is in session.

To inform voters and hold elected officials accountable, Citizens Union issued its 100th anniversary edition of our General Election Voters Directory in October. The handy guide not only indicates which candidates Citizens Union endorsed but provides descriptions of interviews conducted by our Local Candidates Committee and a grid of candidates’ positions on good government issues. A unique feature of the 100th anniversary issue is selected covers and quotations from past Voters Directories. Most of Citizens Union’s endorsed candidates were victorious on Election Day. CU-endorsed winning candidates included Eric Schneiderman, who won by double digits against Dan Donovan for Attorney General, and State Senator Joseph Addabbo, who had one of the more competitive state legislative races in NYC in facing challenger Anthony Como but still won by double digits. CU-favored incumbents State Senator Liz Krueger, State Senator Jeff Klein, Assemblyman Michael Gianaris, and Assemblyman Jonathan Bing, among other reform-minded incumbents, all won. Among those candidates whom CU endorsed and were not victorious were Republican candidates Senator Frank Padavan, who lost to strong reform challenger Tony Avella, and Harry Wilson, who lost in a close race to the incumbent Democratic candidate, Tom DiNapoli, in the race for State Comptroller. These candidates earned our endorsement in part because of their strong support for redistricting, which on the national level, garnered support through ballot referenda in Florida, California, and Minneapolis.

As part of our ongoing work with the City Council to improve election administration, Citizens Union worked to design and conduct a survey of voters exiting the polls after voting in the General Election. Using Primary Day voting problems as a springboard, the poll asked questions about the voters’ Election Day experience at the polls. Thanks to the support of CU volunteers who conducted the survey at their pollsites, CU was able to contribute to the more than 1,200 surveys which were collected. The major problem cited was ballot design, with 1 of 3 voters who participated in the survey identifying it as an issue. Citizens Union’s Dick Dadey appeared with Council Speaker Christine Quinn at a press conference unveiling the survey results, which will be used to bolster the Council’s and CU’s efforts for reforms at the city level.

With the election over, Gotham Gazette turns its attention to the challenges facing the new administration in Albany and how the governor and his staff can address those challenges. In the first such article, Albany reporter David King looked at the Department of Environmental Conservation, which has been so battered by cuts many advocates feel it cannot do its job.

And if you missed any results, check our updated Who’s Running for What — and return for the official returns in the next week or so.

And don’t forget to check out Gotham Gazette’s blog – The Wonkster. In the last few weeks we’ve kept readers up to date on such key stories as the appointment of Cathleen Black as schools chancellor, the latest round of Bloomberg budget cuts and the Cuomo transition.

You can watch the State Comptroller debate in its entirety on NY1’s website.

Who is Citizens Union?

For the past few years Bob Grant has been volunteering at Citizens Union, assisting at events and helping out in the office. This year he joined the Local Candidates Committee and gained firsthand knowledge of how candidates in his home borough of Queens would or would not work for reform of state government. When he originally joined Citizens Union in 2002, he was looking to participate in something that would have an impact on the affairs of his city and state.

“I think Citizens Union is a group of people who are more active, more conscientious, and more concerned than the average person on the street,” said Bob.

Bob grew up in the Ridgewood neighborhood of Queens. He went to college at Notre Dame and from 1977-1983 was on active duty in the U.S. Army. He remained an army officer in reserve for 28 years serving on special missions to South Korea and Bosnia and retired a Lieutenant Colonel in 2005. He has been a public school teacher since 1983 and is currently assigned at Forest Hills High School. He thinks his engagement with Citizens Union helps him teach his students how to think objectively about civic issues.

Join Citizens Union as a Member

Join CU as a member and help ReShape NY. As a reconfigured state legislature assembles in 2011, Citizens Union is poised to activate its coalition effort to stop partisan gerrymandering and change how legislative lines are drawn. Your membership gift of $30 or more s-t-r-e-t-c-h-e-s our ability to mobilize a successful statewide campaign. Contribute today!

In addition to membership in Citizens Union, we have other opportunities to get involved in our work. For students of government, journalism, or those who have an active interest in civic affairs, Citizens Union and Gotham Gazette have internship programs which accept applications year-round. We rely on our interns to expand our capacity, and could not do all that we do without their help. If you know of any interested candidates or would like to apply for internships, please see more information about CU’s  Spring 2011 Policy and Research Internship , our  Development Internship  and Gotham Gazette’s Outreach Internship and Editorial Internship.

Citizens Union In the News

To read recent coverage of our work visit the In the News section of our website.