The end of the year is closing with one major state policy victory and one city policy change having been achieved – state ethics reform and sample ballots for voters appearing online before elections – and one more major issue just ahead: redistricting reform.

We can’t bring change to government accountability and openness or make voting more accessible without the interest and support of members like you. So if you haven’t yet renewed your membership this year in Citizens Union, please do so. And you could also make a year-end tax-deductible contribution to the Foundation.

Your support helps us remain effective in our efforts to advance good government and achieve political reform. Best wishes for a healthy and happy holiday season. 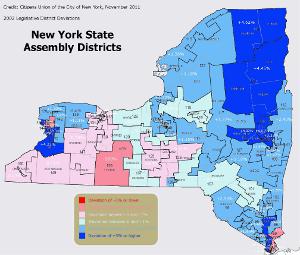 Citizens Union recently   released our comprehensive redistricting report  that makes a definitive case for ending partisan gerrymandering. The report demonstrates how redistricting has for decades undermined our democracy and governance by making elections increasingly uncompetitive, contributing to declining voter turnout, marginalizing the representation of minority groups and delaying the passage of important public policy. The report also provides an in-depth look at how gerrymandering is done, with case studies revealing how cities and communities are divided to ensure the reelection of incumbents and the maintenance of majority power in the state senate and assembly.

The   report  received widespread press coverage and reignited the media’s focus on the issue. See also the   Executive Summary  and   Appendices (map at left can bee seen in greater detail in appendices). Below are links to some of the coverage and support we received.

Citizens Union continues to be engaged in discussions with lawmakers on redistricting reform. While progress has been slow-going, conversations are ongoing and so we remain hopeful that our years-long effort will bear fruit. Two days before we released our report, the New York Times reported that Assembly Speaker Shelley Silver announced his support for a commission entirely consisting of non-legislators to draw district lines and equally balanced between majority and minority parties, a key principle Citizens Union has supported.

Citizens Union   testified  at the Campaign Finance Board’s hearing on draft rules related to regulating independent expenditures on October 27th. An independent expenditure is campaign spending, typically on ads, that is done by independent groups with the intent to influence an election, but it not coordinated with any candidate. While the CFB’s proposed rules mirrored many of our  earlier recommendations  at a March 2011 hearing, Citizens Union made several new recommendations:

Citizens Union’s second set of recommendations also reiterated our continued support for establishing a broad interpretation of independent expenditures to include communications made just before an election that are intended to influence voting at the polls, but do not contain language such as “vote for” or “vote against” a particular candidate or proposal. We also called for greater transparency about those making independent expenditures as well as the targets of such spending.

CU’s focus at the city level has been to, where possible, introduce and/or move forward legislation related to our  50 recommendations to the 2010 City Charter Revision Commission . CU staff has been working to draft bills for introduction following meetings we held over the summer and into the fall with numerous councilmembers. We are also pursuing administrative changes at the Board of Elections in the City of New York and through the Office of Media and Entertainment in lieu of or in addition to legislation in the Council depending on the proposal.

Below are a few highlights of our work in this area the last two months:

Sample ballots were available online in New York City this year for the first time ever before a regularly scheduled election: the November General Election. Due to the advocacy of Citizens Union with the City Board of Elections, we received a commitment from the board earlier this year to post ballots online for future elections. The posting of ballots online in November was a   fulfillment of that commitment , and will hopefully serve as a model for other boards of election in the state. The online ballots were downloaded by over 7,575 users in just two weeks, or 4 percent of the number of voters who turned out on Election Day in New York City.

Citizens Union has been actively monitoring the transition to new voting machines, and had the opportunity to   testify  before the Assembly Elections Committee and Subcommittee on Election Administration and Voter Disenfranchisement. Citizens Union presented in its testimony findings from a survey of counties which have posted sample ballots online for the 2011 elections, as well as recommendations regarding the state’s transition to new voting machines.

At The Pierre on October 27th, over 350 guests enjoyed good wine and a sumptuous meal while celebrating five individuals whose commitment to New York has strengthened our city and helped assure that New York remains a vital, vibrant place to live and work. Following cocktails and conversation, dinner guests gained a variety of perspectives from both honorees and presenters about the critical role of accountable, effective government in New Yorkers’ lives. Close to $800,000 was raised, attesting to the respect this year’s honorees command and the belief in Citizens Union’s strong work. For those who couldn’t join us, we hope these photos convey the flavor of the evening!

Citizens Union is in the process of organizing a civic conversation focusing on state pension reform in collaboration with Baruch College, likely to be held early next year. The panel discussion will seek to reach common ground on how pension reform might be achieved in New York State and provide an overview of the political landscape in Albany. It will likely include various stakeholders, such as labor and elected representatives from both sides of the aisle. We are also seeking to discuss best practices in other states to provide a comparative perspective, and will be making invitations to national experts on pension reform. The invitation will be following in the coming weeks.

Who is Citizens Union?

Shekar Krishnan joined Citizens Union’s Municipal Affairs Committee in January 2011, a little less than two years after graduating from law school at the University of Michigan. Shekar, 26, now a litigation associate at the law firm of Weil, Gotshal and Manges, spent his first year out of law school working at Brooklyn Legal Services Corporation A, representing low-income tenants in housing and community-wide civil rights litigation. He saw in Citizens Union a great way to advocate for good government and transparency outside of the legal profession.

“Citizens Union provides the opportunity to amplify the voices of New Yorkers, by advocating on the political level for the same kind of change we are working for at a legal level in courts, and at a communal level in the neighborhoods,” said Shekar.

On the Municipal Affairs Committee Shekar has most enjoyed working on reform of the City Board of Elections where the MAC has focused on putting sample ballots online, email notification of election information, and increased transparency and accountability. Shekar has enjoyed the chance to address the policy behind many of the legal issues he has worked on around voting rights.

“I’ve seen on the ground in Brooklyn how people can be adversely affected by lack of outreach,” said Shekar, “and have their fundamental right to vote hindered by bureaucracy or because important information was not transmitted to them.”

Shekar grew up in Rockland County, born to parents who emigrated from India. Shekar, who will clerk for federal judge Jack Weinstein in Brooklyn next year, appreciates the sacrifices that they made so that he and his sister would have the opportunities they have today-including opportunities to give back to their communities.

“This city is like no other in that there is such a great amount of opportunity yet also a great amount of need,” said Shekar. “So many New Yorkers are making the most of those opportunities–and also coming together to try and address the serious need.”

Interns play a central role in the work of Citizens Union. They contribute their time by helping out in our office, researching issues, assisting staff, writing articles, staffing events and much more. We are always keen to meet talented students who would like to work as interns for Citizens Union. Please share the opportunity!

State ethics reform. NYC lobbying rules that make sense and are strictly enforced. Online sample ballots that prepare voters for NYC elections. Redistricting reform that restores competitive elections in New York State. CU’s vigilant work advanced each of these critical areas this year, and you can expect the same persistence in 2012.

Support CU today! Become a member or renew your membership! Make a tax deductible year-end gift to underwrite our research and policy work! Support Gotham Gazette! We will maximize every dollar you donate to create more accountable, transparent effective government in NYC and NYS.

Citizens Union In the News