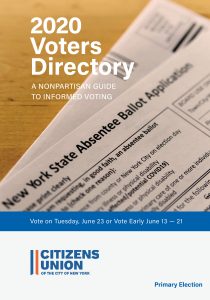 In this unprecedented election cycle, during a city, state, and national state of emergency, Citizens Union has evaluated 30 candidates in 13 races for state Senate and Assembly, as well as Queens Borough President, to determine who strongly supports our issues, can advance a reform agenda, and can best fulfill the obligations of the position.

To help our supportive members prepare to vote, Citizens Union has been publishing an annual Voters Directory for over a century. The current edition provides an overview of the 2020 Primary Election, including voting and registration information and listings of every contest for all races that will be on the ballot in New York City this June. It also includes a roster of Citizens Union’s preferred candidates in several key races, and information about the rigorous evaluation process and assessments of candidates.

For the first time in over 100 years, the evaluation process was conducted entirely online. Due to the threat of the COVID-19 pandemic and NYS PAUSE, all interviews and meetings were held by video conference.

To learn more about our evaluation principles and process, click here.

For a summary of the reform agenda in the last legislative session, click here.

Assembly District 73 – No preference in the contest between Cameron Koffman and Dan Quart.
Upper East Side, Midtown East, Turtle Bay, and Sutton Place

This Voters Directory would not be possible without the hard work of members of the Citizens Union Board, Local Candidates Committee (LCC), staff and interns. 30 volunteer LCC members, 7 interns, and staff members formed nonpartisan interview teams and evaluated 30 candidates in 13 races for state Senate and Assembly. We thank them for contributing their time, energy, and expertise to interviewing and evaluating candidates, especially during this challenging moment. We thank you for your support, and hope you enjoy the latest edition of the Voters Directory.