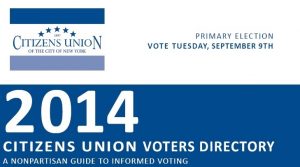 On Tuesday September 9th, 2014 registered voters in New York will head to the polls for the Primary Election. Citizens Union’s Voters Directory helps voters by providing a comprehensive overview of the 2014 party primary elections, including voting and registration information and listings of every contest for all races on the ballot.

Citizens Union also evaluates candidates in certain races and issues preferences. This page contains information regarding each of the 15 races that were evaluated, accessed through the links for each district below, and indicates our preferred candidates in bold.
All questionnaires submitted to Citizens Union for contested primary elections are available; please note, however, that due to limited capacity, Citizens Union is not able to evaluate every race taking place in New York City.

Have questions about voting and registration?

APPLYING FOR AN ABSENTEE BALLOT FOR THE PRIMARY ELECTIONYou may vote by absentee ballot if you are:

Getting to the polls:

Signing in at the polls: