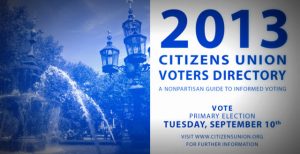 This page – with links below – contains comprehensive information regarding each of the 33 races evaluated by Citizens Union. Each election contest’s page contains:

All questionnaires submitted to Citizens Union for contested primary elections are available; please note, however, that due to limited capacity, Citizens Union is not able to evaluate every race taking place in New York City.  Our past preference and endorsement decisions are also available.

District 33 – No preference between Stephen Levin^ and Stephen Pierson