Rachel Konowitz is Co-Founder and COO of Motivote, a civic engagement platform that helps campaigns, causes and companies mobilize their networks. Rachel developed a passion for creating opportunities for civic engagement and giving young people the tools to be effective activists during her four years as a student organizer with the PIRGs. During this time, she ran voter registration and mobilization projects in Connecticut and Colorado that collectively reached over 50,000 people. Rachel holds an M.P.A. in Social Impact, Innovation and Investment from NYU’s Wagner Graduate School of Public Service and a B.A. in Political Science from Skidmore College.

In his first legislative session, Senator Myrie (20th Senate District) served in many leadership roles on several major legislative victories. Having grown up in a rent-stabilized apartment during the affordable housing crisis, Senator Myrie was honored to co-lead the Senate’s Housing Reform Working Group, which produced New York’s strongest affordable housing and tenant protection laws in generations. He also served on the Senate’s Criminal Justice Reform Working Group, resulting in sweeping reforms to cash bail, discovery, and speedy trial laws. And as Chair of the Elections Committee, Senator Myrie led hearings on Public Financing of Elections and Automatic Voter Registration, and presided over historic election reforms including Early Voting, closing the LLC loophole, and many other crucial reforms to protect and expand our democracy. Senator Myrie, winner of numerous community awards and part of numerous important progressive caucuses, derives inspiration for his public service from his mother, who moved to Brooklyn 40 years ago from Costa Rica on the promise of a mattress in a friend’s apartment and a job at a factory. Myrie is a graduate of Brooklyn Technical High School and earned his B.A. in Communications and M.A. in Urban Studies from Fordham University. He later earned his J.D. from Cornell Law School.

Eitan Hersh is the author of Politics is for Power (2020). He is an associate professor of political science at Tufts University. Hersh studies U.S. elections, voting rights, and civic participation. He is the author of the academic book Hacking the Electorate and numerous scholarly articles. He regularly serves as an expert witness in court cases related to voting and registration. His public writings have appeared in venues such as the New York Times, Atlantic, Boston Globe, and FiveThirtyEight. Hersh earned a PhD from Harvard University in 2011 and served for six years on the faculty at Yale University before joining the Tufts faculty in 2017.

Melva M. Miller is the Executive Vice President at the Association for a Better New York (ABNY) where she leads the organization’s Census 2020 initiative for an accurate count. She works with the Chairman and the Executive Director to ensure the census push is a success.

Most recently Melva has served as the Deputy Borough President of Queens, working with the Borough Presidents on moving Queens forward. Melva has been a passionate and dedicated community organizer since 1993. Her achievements include the creation of the Jamaica NOW Action Plan, a stakeholder-driven strategy to increase quality employment, economic diversity and financial security in downtown Jamaica, and she was also the lead organizer of the Western Queens Tech Strategic Plan, an initiative that produced a five-year blueprint for equitable growth of the Long Island City and Astoria tech ecosystem.

Melva has held several senior economic development roles throughout her career, including Director of Economic Development for her hometown borough and Executive Director for the Sutphin Boulevard Business Improvement District. Melva holds a Bachelor’s degree from John Jay College of Criminal Justice, a Master’s degree in Social Work from Hunter College School of Social Work, and recently received a second Master’s Degree in Philosophy from The Graduate Center at the City University of New York. She is currently a Ph.D. candidate in the Social Welfare program at CUNY’s Graduate Center. 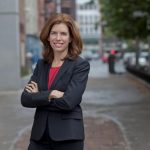 Julie Menin is the Director of the Census, an attorney and civic leader who has over two decades of experience in the legal, regulatory and public sectors. Menin also brings years of experience organizing, advocating and securing funding in the non-profit, private and government sectors for a number of initiatives, including her work as a leading force in the redevelopment of Lower Manhattan in the wake of 9/11. In addition, Menin chaired Community Board 1 for seven years in the aftermath of 9/11 and was a strong and vocal advocate for the community. During her time as chair, she spearheaded the approval of the Islamic Cultural Center and Mosque. Menin also served as Commissioner of the Redistricting Commission in 2001 where she led a non-partisan effort to set new City Council district lines.

Menin most recently served as the Commissioner of the Mayor’s Office of Media and Entertainment and launched dozens of new initiatives that promote equality in the media and entertainment industry. Prior to her time at MOME, Menin served as Commissioner of the Department of Consumer Affairs, where she was instrumental in implementing many of the Mayor’s signature projects, including the Paid Sick Leave Law, the Small Business Relief Package to reduce fines on businesses, and the implementation of the Living Wage Executive Order. In addition, she launched the City’s first expanded Earned Income Tax initiative, creating an outreach program that resulted in an extraordinary 50 percent increase in New Yorkers using the City’s free tax centers and returning $260 million to low-income New Yorkers. As Commissioner of DCA, Menin tackled bureaucratic barriers that stymied economic growth and resulted in a one-third reduction in fines on small businesses and 70 percent increase in consumer restitution. She also launched investigations into not-for-profit colleges, fraudulent auto loans, debt collectors, and other industries preying on New Yorkers.

Menin also is an Adjunct Professor of Law and Public Policy at Columbia University where she teaches When Cities Take the Lead, a class focused on how cities fill the void of state and federal inaction in fields such as criminal justice, consumer protection, immigration and environmental protection. She began her career as a regulatory attorney at Wiley, Rein & Fielding in Washington D.C., where she specialized in consumer protection issues and worked as Senior Regulatory Attorney at Colgate-Palmolive in New York City handling regulatory matters for the agency encompassing the Department of Justice, Federal Trade Commission and consumer litigation. 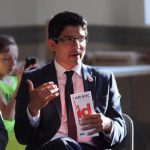 Carlos has authored over 80 pieces of legislation of which 24 have been approved and he is co-sponsor of 625 legislative items of which 277 have been approved. Recent legislation he has introduced includes proposals to promote workplace safety with apprenticeship training, to punish predatory landlords, and to improve street safety for cyclists and pedestrians. Carlos authored the legislation for New York’s first municipal identification card, IDNYC, which now serves over one million registrants.

As Chair of the Committee on Immigration, Carlos led negotiations that funded the nation’s largest public defender program for undocumented immigrants, and for the greatest City allocation in recent history for adult literacy services. He has supported innovative programs for immigrant day laborers, street vendors, and worker cooperatives. Carlos’ commitment to direct democracy is shown in his annual allocation of more than $2 million to Participatory Budgeting (PB) where residents nominate and vote for capital budget projects. In 2017 for the fourth year in a row District 38 produced the highest number of PB voters City wide, and welcomed voting by all residents regardless of immigration status, and for the first time, middle school students.

A champion for the neighborhoods in his district, Carlos has successfully defended the Sunset Park and Red Hook manufacturing zones from luxury residential development. He has fought gentrification and displacement through street protest, support of tenant advocates, and through legislation that extends tenants’ rights including the right to counsel in housing court.