Micah Kellner is the incumbent, having been first elected in a special election in 2007.  Kellner is running for re-election because he would like to see further progress on reforming state government in Albany.  He supports the vast majority of CU’s reform proposals, and has worked on many of these issues in Albany, including rules reform, transparency and open data for state government, and ethics reform, having introduced his own reform proposals.  Among his reform proposals are requiring all bill memos from lobbying organizations to be posted online, creation of an online portal for state agency data, and further reforms to the state’s ethics laws. Kellner, however, voted against the redistricting constitutional amendment earlier this year, believing that it is not an ideal reform proposal.  He additionally only committed to vote in favor of its second passage if it would fail without his support.  Other issues that Kellner has focused on include animal welfare and ensuring the rights for individuals with disabilities, in particular requiring that all taxi cabs are fully accessible.  While Citizens Union believes that Kellner is sincere in his desire to reform state government, we are troubled by his lack of support for redistricting reform and opposition to the constitutional amendment creating an independent redistricting commission.  For this reason, Citizens Union chose not to endorse Micah Kellner. 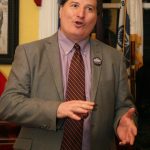 Michael Zumbluskas is an active Independence Party member who currently works for city government for the Department of Transportation.  He is running for office because he believes that state government should be more responsive to small businesses and can operate more efficiently.  While Zumbluskas supports many of Citizens Union’s reform agenda items, he opposes public financing of elections and creation of an Independent Budget Office, believing that the office would add another layer of government bureaucracy. With regard to other issues, Zumbluskas supports reducing tax burdens on small businesses and believes that his experience working for the city provides him with relevant experience regarding creating efficiencies in government.  While Citizens Union found Zumbluskas to have many ideas that were worthy of discussion, his lack of in-depth policy knowledge and limited support in the district, prevent us from endorsing his candidacy.