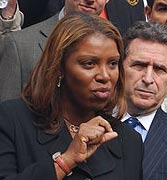 Letitia James, councilmember since 2006 and chair of the council’s Contracts Committee, is seeking reelection because she only served one term in the council and therefore was not subject to term limits, even though she opposed the extension.  She also touted her strong record on transforming the community by implementing bike lanes in the district, planting trees especially next to public housing, pushing for additional stimulus funds for the district, creating more affordable housing units, and taking the lead to resolve district issues like increasing daycare options, feeding the homeless, and increasing diversity in the filming industry.

Ms. James said she opposes the Atlantic Yards project because of the use of eminent domain and control and vision for the project being solely in the hands of the developer.  She said that the major problem with the Atlantic Yards plan is that it in no way addresses the district’s major issue – affordable housing.  She worked with community representatives to develop the “unity plan,” which does not include a stadium, but does include affordable housing and does not require eminent domain to implement.  She also is concerned about the potential for traffic congestion presented by the Ratner plan traffic congestion.

Ms. James spoke a lot about reform issues, including how to improve the council’s discretionary funding process where she believes too many community nonprofits have had a hard time complying with the new process.  In her role as chair of the Contracts Committee, she has worked with advocacy groups to find help for nonprofits in completing the applications.  She proposed a system where all members should have equal amount of discretionary funding and base council office funding.  She also thinks that committee chairs should be able to hire their own staff.  Ms. James is Citizens Union’s preferred candidate because she has been accessible to her community, a strong voice within the city council and committed to advancing reform issues. 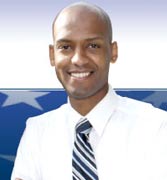 Medhanie Estiphanos, a special education teacher and who has built schools in Eastern Africa, is running for city council because he believes the council needs to focus more on talking with constituents about the issues and solving the people’s problems – most important of which is improving police-community relations.  He thinks there needs to be a new approach because demonizing the police only creates a more tense relationship with those who are protecting community residents.  Instead, he supports a community policing model where cops who live in the district and know it best should be the officers on the street because they would be better able to assess real problems and focus more on engaging individual citizens and crime prevention.  He also thinks that police officers should greet citizens more often without their uniforms in a non-threatening situation which he believes will reduce some of the tension built into the existing power structures.

Mr. Estiphanos would also prioritize finding ways to address the current disparity between poverty and wealth because the gap is too severe in his district.  He also believes that the city needs additional and stronger tenant harassment and rent control laws. He would work to create public housing set asides within the district for any major new development instead of outsourcing which creates economically-segregated communities. On transit issues, he said that the gas tax should be increased to subsidize mass transit.

Mr. Estiphanos was strong on reform issues, including advocating for the complete elimination of the council’s discretionary funding.  He did say, however, that if this process is going to remain, there should then be a more equitable distribution plan to eliminate corruption. He also supports nonpartisan elections and empowering council committee chairs.  Citizens Union believes that Mr. Estiphanos is an impressive candidate with some very innovative ideas, who with more experience before taking office, should run again in a future election.

Delia Hunley-Adossa, a lifetime resident of the Clinton-Hill portion of council district 35 who has been actively involved in the community, said she was inspired to run for office by President Obama’s message of change.  She is the President of her Mitchell-Lama co-op board and wants to put her community experience to good use as an elected official.

She believes that district needs affordable housing and jobs during the economic downturn.  Thus, if elected she said she would work to ensure that all new development in the community include a community benefits agreement to provide for affordable housing and jobs.  On environmental issues she said she would use green technology to teach people how to retrofit homes from the 1950’s to present-day sustainable living.  Ms. Adossa said she would fight to eliminate mayoral control of education because the current system vests too much control in one person and advocate a return to the old Board of Education system with a little bit of tweaking.

On reform issues, she stated that the city council’s discretionary funding process needs to be vetted and documented more substantially, but did not give more concrete reforms except to say that it should include training.  Ms. Adossa, while unfamiliar with specific council operations, did recommend that the council be more interactive with constituents similar to work done by some Brooklyn Congressmembers in her neighborhood.  On the Atlantic Yards development, after studying the project and taking construction classes, she has advocated in support of the project because it will create much-needed jobs in the community.  She said that Citizens Union should support her candidacy because she is for the people, with the people and will be elected by the people.