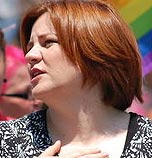 Christine Quinn, councilmember since 1999 and speaker since 2006, discussed her leadership in passing four budgets on time, professionalizing the city council through initiatives like CouncilStat, clarifying council rules governing the legislative process, ensuring full day pre-kindergarten and leading on middle school education issues.  She was especially proud of her tenant legislation which brought tenants’ voice back into city hall.  She is seeking reelection because she felt that she has done a good job and has unfinished initiatives she would like to continue focusing on in her district.  Among her priorities would be to: (1) create additional affordable housing, including the housing affordability recovery program which would create affordable housing for homeowners; (2) protect vital services which she said is very hard to decide which services are nonessential; (3) focus more attention on middle schools where performance increase is not as high as the rest of the system and fund teachers who stay at low performing schools; (4) work to preserve New York’s neighborhoods; and (5) work to improve quality of life especially during the current economic downturn.

Ms. Quinn said she has long been opposed to term limits and when first ran for speaker she said she would consider this issue through legislative action, but since she had no indication from the mayor that he was supportive, she did not think this was an issue that the council should take on unilaterally, so she focused the council on other issues.  She believes that legislative leaders when taking up an issue need to consider whether it will be passed or vetoed and term limits was not an issue to which she felt comfortable subjecting her members if it was going to be vetoed by the mayor, so she felt it was only appropriate for the council to reconsider this issue when the mayor reversed course and wanted to extend term limits given the decline in the economy.  When asked why the council did not pursue a referendum, she responded that the time-based reality of the process and going to the U.S. Department of Justice made it unrealistic to get it on the ballot and have enough time for consideration without disrupting the electoral process too substantially.

On council reform, Ms. Quinn said the current legislative rules already provide the right balance. She said that on the issue of making the council a full-time job and limiting outside income, she stated that with term limits the issue of outside income is more material because forcing someone who can only hold office for a set time to give up their career and she would not push this issue right now because she believes may hinder qualified candidates from running for office. She said that many issues are related to solution on discretionary funding and the real question is what a leader does when they find out something is awry.  She reformed the process substantially by putting in more stringent vetting requirements and approval requirements and placing information online.

On the issue of the CCRB, she has continued to advocate for the Mayor and the Police Commissioner to enforce the memorandum of understanding which gives the CCRB the power to prosecute the cases it substantiates, though she is concerned that council legislation will be counterproductive because she has doubts about the power of the council being able to successfully override the mayor.  She believes that council oversight hearings and introduction of legislation will push the conversation forward in a healthy way.  When asked about improving education, she supports the recent decision in Albany to give the IBO power to evaluate the graduation and test data as it will depoliticize the numbers and take some of the focus off the DOE.  She also acknowledged that the DOE’s budget needs to be more transparent.

Citizens Union preferred Ms. Quinn, notwithstanding its strong disagreement with her over term limits, because she has been effective in bringing about needed reform in the areas of lobbying, campaign finance and member items. 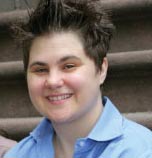 Yetta Kurland, an educator, civil rights lawyer, and community organizer, decided to run for City Council after the Republican National Convention in 2004 when as a member of the National Lawyers Guild she was involved in arraignment proceedings for persons involved in the convention.  Her interest in seeking office was further piqued when she realized that Speaker Quinn’s seat was being vacated.  When term limits were extended, Kurland realized that she was going to have to face Ms. Quinn if she wanted to run for office.  She felt she needed to keep running to show integrity and breathe leadership into the political situation.  She was against the addition of another term for incumbents because the voters of New York had already voted twice by referendum for a 2-term limit.  On a related note, in addition to term limits, she said she would like for a city charter revision commission to look at land use, police accountability and budget controls.

Ms. Kurland’s top five priorities if elected would be: education, tenants’ rights and affordable housing, empowerment of the community through their community boards, job creation, and accountability, reform, transparency. In particular, she sees the current land use practices as displacing her community, rather than enriching it, as evidenced by the fact that musicians have to live in other boroughs, but work in Manhattan. She said the process needs more teeth, such as adequate environmental impacts, and stressed a need to focus on urban planning, rather than letting the developers have their say completely. When asked about council reform, Ms. Kurland said she would focus on good government issues because those are near and dear to her heart, but she said she would defer to watchdog groups like Citizens Union to guide her about what should be priorities.  Further, she said if she won the election and ended up not focusing on reform, she would ask the voters to vote her out.  She said that she believes that discretionary funding should be eliminated.

Ms. Kurland is an enthusiastic and engaging candidate.  No doubt her activist background would serve her well if elected, but Citizens Union was concerned about her deference too much to being guided by the work of advocacy groups, often in place of having a real vision of her own. 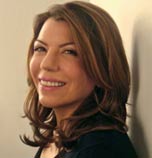 Maria Passannante-Derr, a lawyer with a private practice, is running because she is deeply rooted in her community, as she currently lives on the same street on which she grew up, and because she is involved in grassroots efforts in the community, including chairing the community board and serving as chair for many committees on the board.  Her uncle was a well regarded local elected official, so she has name recognition in her district.

She wishes that the term limits question would have been decided by a referendum and agrees that it should be a major focus for a Charter Revision Commission, if one is created.  She expressed reservations, however, about the actual composition of the commission, because it is appointed by the mayor. Other than term limits, Passannante-Derr detailed the issues that directly affect her district.  For the lower part, she outlined the kindergarten placement crisis, quality of life issues, the many construction projects and the preservationist board.  For the middle and upper parts, she mentioned the Hudson Rail Yards, affordable housing and rent stabilization.  She hopes to increase the incentive for developers to build affordable housing from 80/20 to 70/30.  In general, she would focus on the faith-based shelters that have been abandoned and the LGBT homeless youth that need support.

Concerning council reform, Passannante-Derr believes that the speaker has way too much control over committees and which bills surface and which do not.  She understands the need for discretionary funding, as councilmembers are expected to bring money back to their districts, but believes that every effort should be made to keep it accountable.  If there was full vetting on member items, the projects would be honest and fair.  She expressed concern over councilmembers like the Speaker receiving political contributions before and after development projects and felt that this is a huge problem.  Even if these payments are disclosed, it is still a problem because they are not publicized, which is why she advocated  for quarterly disclosure reports. She also mentioned giving district attorneys enforcement responsibility, but that would result in a conflict of interest with the Campaign Finance Board, among other entities.

When asked why Citizens Union should support her, she replied that she is the qualified alternative to the incumbent.  She has been out there in the community and will continue to be.  Despite her vast knowledge of and commitment to the district, Citizens Union believes she demonstrated very little knowledge about how to affect change within the political process and how the Council actually works.