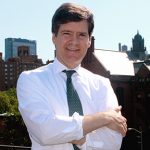 Brad Hoylman is a fresh presence in the state senate, and is serving in his first term. Previously he was the general counsel of the Partnership for New York City and a community activist. He is running for re-election because he seeks to pass a pied-a-tierre tax bill that he is introducing, as well as the Gender Equality Non-Discrimination Act, the Women’s Equality Agenda, the DREAM act, and would like to enable municipalities to set higher minimum wages. Hoylman is also passionate about reform issues, as he supports every single one of Citizens Union’s issues on the candidate questionnaire, but one – he indicated opposition to Proposal 1 on his questionnaire, but stated in his interview that this was an error, and that he does indeed support the redistricting amendment since he voted for it in the senate. Hoylman supports legislators serving full time, because he believes earning outside income enables a “fundamental conflict” to exist between representing one’s constituents and representing private clients. Hoylman co-sponsors a bill to strip pensions from corrupt public officials via a constitutional amendment, and is the lead sponsor of another bill to make receipt of per diems conditional upon agreeing to give up one’s pension in the event of a felony conviction for corruption, which he believes may be easier to enact than a constitutional amendment. Hoylman is a co-sponsor or original sponsor of every major ethics bill introduced in the Senate. Citizens Union believes that Brad Hoylman has demonstrated thoughtfulness and integrity, is a partner in working on reform issues, and is well-poised to be a leader on ethics and governmental reforms. We are pleased and proud to endorse Brad Hoylman for re-election. 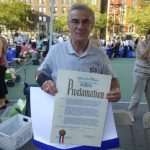 FRANK SCALA – REP
Has not returned questionnaire.
Candidate could not be scheduled for an interview by Citizens Union