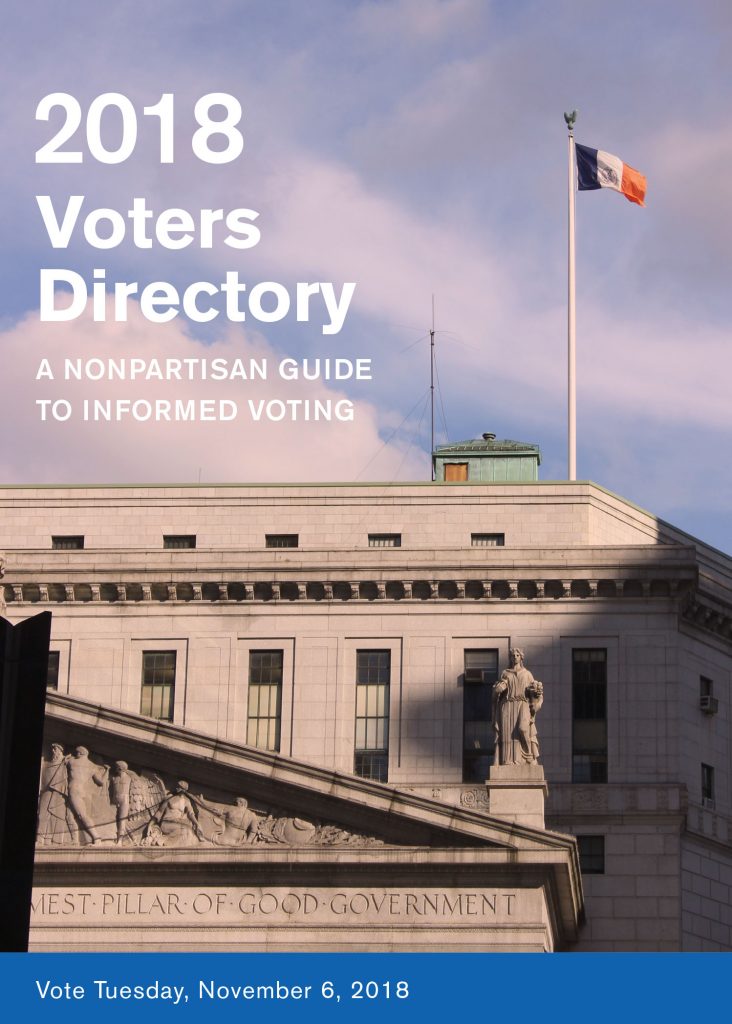 Click here to read it as a high res PDF

Click here to read it as it was printed

On Tuesday, November 6th, New Yorkers will vote in the General Election for Governor, NYS Attorney General, NYS Comptroller, and the state legislature, as well as local judicial offices and federal positions.

We caution voters that there may be last minute elimination or reinstatement of candidates on the ballot, so the list contained in this directory may have changed since this document was printed.

In this election cycle, Citizens Union has evaluated 17 candidates in 6 races for Governor, NYS Attorney General, NYS Comptroller, and NYS Senate to determine who strongly supports our issues, can advance a reform agenda, and can best fulfill the obligations of the position.

Interview teams made up of Local Candidates Committee members assess the candidates based on their responses to CU’s questionnaire (a pre-requisite for interviews), research, first-hand knowledge of the candidates, and interviews with the candidates, which are approximately 30 minutes each. The interview teams then make advisory recommendations to the full Local Candidates Committee, which deliberates and makes recommendations to the Citizens Union Board, which makes the final decision.

An “Endorsed” rating reflects a candidate that Citizens Union deems not only qualified for the office with a viable candidacy, but also committed to an agenda of positive reform. Please note that candidates not endorsed may nevertheless be highly regarded, which is generally reflected in the commentary.

Citizens Union issues a “Preferred” rating in primary elections, and an “Endorsed” rating for General Election contests. A “No Endorsement” rating may result when there is insufficient information available, it is believed that the candidates are of equal merit, or if no candidate interviewed by Citizens Union is believed to be effective or capable of representing the district.

The following guidelines are used by the Local Candidates Committee and Citizens Union Board of Directors in the evaluation of candidates:

You are eligible to vote in municipal, federal and state elections if you are: :

The General Election will be held on Tuesday, November 6th. Polls will be open from 6:00 a.m. to 9:00 p.m. If you have general questions regarding eligibility or the location of your polling place, please call 1-866-VOTE-NYC. You can also locate your polling place online, including handicap entrances, at https://nyc.pollsitelocator.com/search

Under federal law, if you are disabled and choose to vote in person rather than by absentee ballot, you are entitled to assistance. You can rely on the election employees for help.

At the polls, if you are not on the voter registration list, it may be because your registration form was not received in time or was filled out incorrectly. If you believe that you are eligible to vote, you can still vote by requesting an affidavit ballot. After the election, the Board of Elections will check its records and your vote will be counted if you are indeed eligible.

Paper ballots will be used for casting votes, which can be marked using either a pen or a ballot marking device (BMD) as described below. Ballots are counted after they are inserted into an electronic scanner. The scanner will then be used to count the votes after the polling place has closed at the end of Election Day. A bin attached to the scanner will capture and keep the paper ballots as a record of all votes. This new process began in 2010 with New York’s adoption of a new voting system to meet federal accessibility requirements.

The process works as follows:

Voters will be able to use the Election Systems & Software (ES&S) AutoMARK ballot marking device (BMD), which is mandated to be available at each polling location. Any voter, including voters with disabilities, may use the BMD to view or listen to the ballot in any of the required languages for that poll site (which may include English, Spanish, Chinese – Mandarin, Chinese – Cantonese or Korean). Voters may use the BMD to complete a paper ballot independently and privately on Election Day by using its ATM-style touch screen, Braille-enhanced keypad, sip and puff device or its rocker paddle. More information on the new process is available at the New York City Board of Elections website http://vote.nyc.ny.us/html/newway_en/using_bmd.shtml

To Research Candidates and Issues

This Voters Directory would not be possible without the hard work of members of the Citizens Union Board, Local Candidates Committee (LCC), staff and interns.

27 volunteer LCC members, 5 interns, and staff members formed nonpartisan interview teams and evaluated 17 candidates in 6 races for Governor, NYS Attorney General, NYS Comptroller, and NYS Senate. We thank them for contributing their time, energy, and expertise this fall to interviewing and evaluating candidates.

We thank you for your support, and hope you enjoy the latest edition of the Voters Directory.